I googled Urban Hike and here is what I found on the urbandictionary.com website: “An urban hike is an outdoor activity that consists of walking long distances, usually with a backpack, in urbanized outside environments, often following sidewalks, concrete bike paths, paved roads with the objective of arriving at destinations of shopping, dining or other entertainment.”

The winter/spring shoulder season left many wooded trails still wet or snow covered, so for the next two weekends we explore the urban hike. No gas, no car keys, no maps or compasses – just comfy hiking shoes and a few bucks in your pocket.

The first weekend was a circular trip around the Halifax peninsula from tip to tip. From downtown, central Halifax we head thru the ‘funky’ north end:  Gottingen St ~ Novalea ~ Seaview Park, which is located below the MacKay Bridge overlooking the Bedford Basin (former Africville community). It was a cloudy day but nice for a walk. 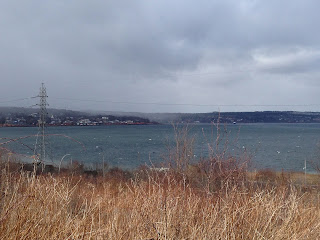 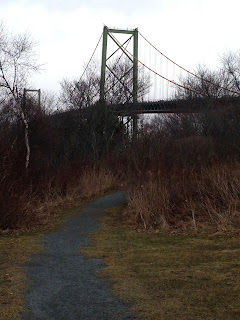 After a quick break to take a few pictures, we leave the north end via Leeds/Agricola St until we came across the army surplus store.  Having never been in before, it was worth dropping in and taking a quick look around.  A few blocks later was a stop into Cafe Aroma Latino for an excellent coffee-to-go, with a few unexpected purchases to take home: coconut soda and a bottle of Latino hot sauce.  It’s a good job I have my backpack! This urban hike concept is pretty cool – it is hard to find a coffee shop in the backwoods of Colchester county.

We cross the Halifax Commons back in the central Halifax area and head towards the south end of town following Robie St ~ St Mary’s University ~ Point Pleasant Park.  We complete the outside perimeter of PPP, around the container pier and finish up our hike back downtown. Yes, a bit tired but felt good about what had been accomplished that day.  Even better, it makes for a great Google map.

The following weekend was a trek around the City of Lakes – Dartmouth. Across the MacDonald Bridge (otherwise known as the Old Bridge) we walk thru downtown Dartmouth, making a pit stop at a drug store for Kleenex and Cadbury Creme Eggs – well I didn’t stop for creme eggs but heck, they were marked down to almost nothing.  It would be a sin to leave them there (can I quote you Lisa!) . Prince Albert Rd along Lake Banook has excellent paved pathways closer to the lake than the road – nice. We turn off Locks Rd and enter Shubie Park, Dartmouth’s largest park with the famous Shubie Canal and locks criss-crossing the park. 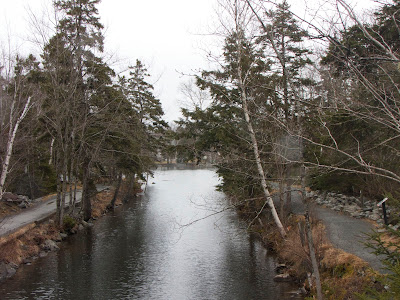 I enjoy the peace and quiet of the park environment until we exit next to the “not so peaceful” Micmac Mall. It is inevitable that we need to go back uphill no matter which route you take so we head up behind the mall onto Woodland Avenue.  A quick stop at the grocery store for some naan bread to accompany the butter chicken that is simmering at home in the slow cooker, back across the Old Bridge and home for a hot cup of tea followed by a delicious dinner of Indian food.

Each weekend urban hike had a distance of 18km or 19km but it lets you see your city from a different perspective.  Even though I have run most of those distances and routes over the years for marathon training, you tended to strap on the headphones and boot it.  Being able to stop for a coffee or treat is a nice change.