Finding myself with the use of a nice car rental for a few weeks, I had a hankering for a little road trip on Sunday, March 17th. Having read about a trail system in the Annapolis Valley near the town of Berwick called Black Rock Trails, it sounded like an inviting option. The thing I like about some trail systems, including this one, is that they may be designed to fit together as a series of loops – with varying distances or levels of difficulty. If you are full of pis’n’vinegar, you can do a couple of loops or if the weather turns crappy (blasphemy – not in Nova Scotia !) you can loop back.

The day started good enough, having downloaded a couple of pages of maps and trail information from various websites. As the trail sits on private property, it did not have authentic provincial or trail club documentation. We had mapped out a desired route and off we went. 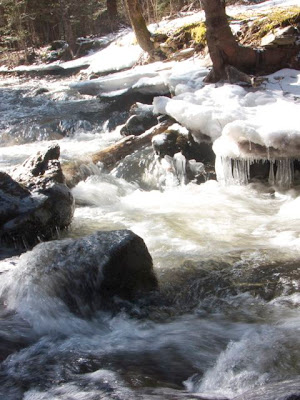 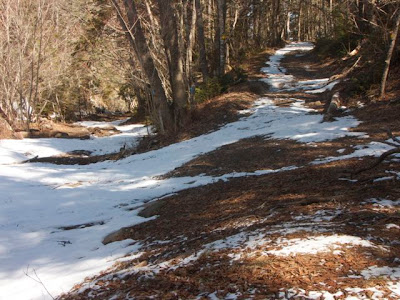 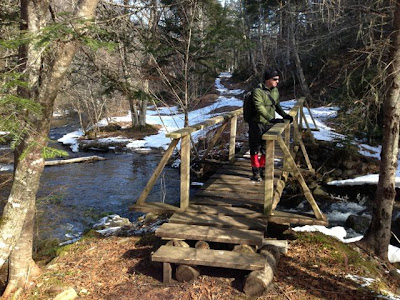 The first part of the trail was well marked and we enjoyed the scenic icy brooks and snowy forest pathways. Our trail route brought us face-to-face with the awesome Bay of Fundy, famous for the crazy high-tide changes. We could see Cape Chignecto across the bay, bringing back memories of a challenging &nbsp 3-day trek&nbsp we did a few years back.

Things got a bit weird when landmarks we were expecting didn’t materialize or when trail start and end points didn’t lineup with our maps. The Balsor Road Trail, the largest and most difficult, took a northerly turn about one-third of the way along, rather than the southerly route shown on the map. My friend, experienced in the use of compasses and GPS tracking, did not take long confirming that things were not right.

We decided to continue southerly but soon realized that this area was actively being worked by loggers – we could hear machinery humming ahead. The problem was this activity was going on smack dab in the middle of the original trail route.

To make a long story short, my friend’s knowledge of marking GPS coordinates at regular intervals helped us to hike around the logging, selecting an alternate route and hooking back up with the original trail. The thing I learned was DON’T ALWAYS TRUST MAPS FROM ADHOC WEBSITES. All the maps we had were INACCURATE – not reflecting recent changes to the trail system that affected the Balsor Road trail in particular. The sign at the trail head was more or less up-to-date but we paid little attention to it as we had maps in our pocket. Be very careful on this trail – bring a compass and GPS and if you are not proficient with these tools – stick to the early trail loops that are fairly well marked.