Like Day 3 ran into Day 4; Day 4 runs into Day 5.  The summit was exhilirating and gave everyone a bit of “second wind”.  But the reality was, we had to get ourselves back down, in the daylight, where we could clearly see what was so cleverly masked in the darkness of the climb. Hmmm, should be interesting…… 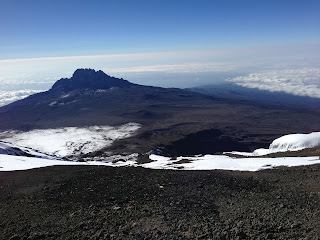 We had a 1.5 kilometer trek along the rim from Uhuru Peak back to Gilman’s Point; then 4 kilometres down the scree slope to Kibo Hut, where we were promised an hour’s rest. Once the sun comes out, the frozen scree loosens up and becomes loose and gravelly, which is why they prefer we do this section while frozen. We make surprisingly good time on the descent, even able to almost ” foot ski” in the sandy dirt. One hour later – we have made pretty good progress; although I don’t know this person and don’t even remember taking the picture (you get like that in thin air 🙂 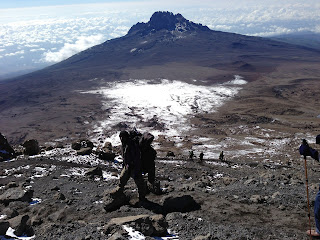 What took us 7-1/2 hours going up took about 2-1/2 hours to backtrack. As promised, we are able to have tea and rest for an hour before continuing the 12 km hike down across the Saddle desert and back to Horombo Hut, where we had stayed on Night #2. Can you say tired –  we fell into bed!

That left 18 km for Day 5, another sunny day with a 7:30 AM start with a rested, recharged group. As I had mentioned earlier this route is labelled the “Coca-Cola”; so we received homemade french fries and cold Coke for lunch at Mandara Hut where we had stayed on Night #1. It was our first drink of pop all week and was a nice treat. 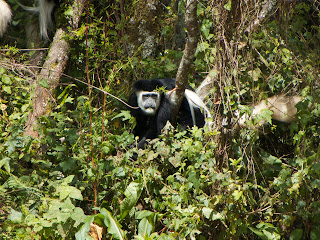 As we ate our lunch, we were treated to a show by the colobos monkeys which were playing around in the forest just below the dining hall. 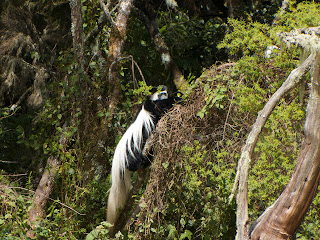 They are black with a long white tail and white mane across their backside. Oddly enough, they have no thumbs. But they are just a whole lot of fun to watch.

We reach the trailhead at Kilimanjaro National Park by 3PM and complete the necessary sign out procedures and load into the minibus for the return ride to the Springlands Hotel. All I can can say is it is a good job the windows were open on that bus as it had 16 guys who hadn’t showered in 5 days!

We have one hour to check-in, get our valuables from lockup and storage, grab a shower and and then meet in the gardens for closing ceremonies. Here you present the tip to the trek staff and we receive our official climb certificates from the National Park.